It’s still very busy in my house.  It’s summer time and the grandkids are visiting which leaves gran and grandpa no spare time so no real post this week.  Just some more pictures from Paris that Heather took.  Today here are some pictures of the stained glass at Sainte Chapelle which is near Notre Dame.

We visited Sainte Chapelle (or in English, “Holy Chapel”).  We walked the roughly two miles from the Musee de L’Armee at Les Invalides and in retrospect we all wished we’d gotten the metro.  On our way to the chapel at least four ‘ring’ scammers tried their tricks on us – they pretend to find a ring on the ground, stop you and eventually try to sell you the ring – but we’d been warned and didn’t fall for it.  Well, I should say we read all about the scam in Rick Steves’ book on Paris.

Based on St. Steves’ book (as I started to refer to Mr. Steves by the end of the week) we thought we were in for a great treat.  The line to get in was very long and took about 45 minutes.  We walked in the door expecting to see great stained glass but this is what we saw: 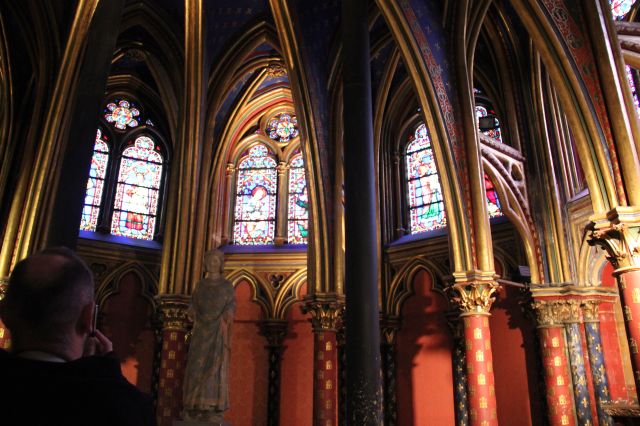 The windows in the first floor

My heart sank when I saw the small dark space with a little gift shop counter on one side and thought, “Did I walk two miles and wait in line for 40 minutes for this?” Then we noticed there was a stair leading up, climbed and then saw this stained glass window: 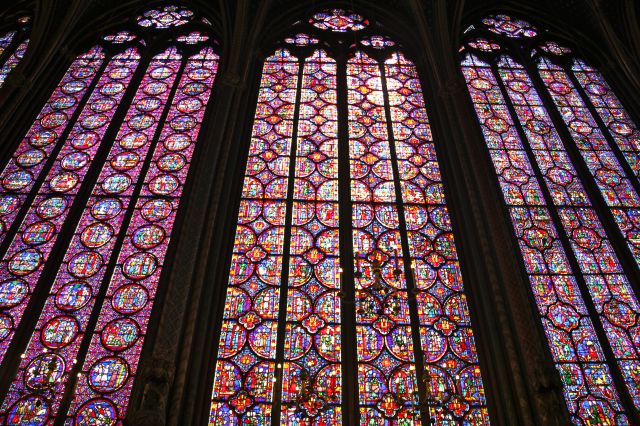 Stained Glass at the top of the stairs

WOW, doesn’t really describe it and no camera can really capture the spender or scale of the scene.  There was a number of paintings, carvings and statues around the room.  Here is one statue: 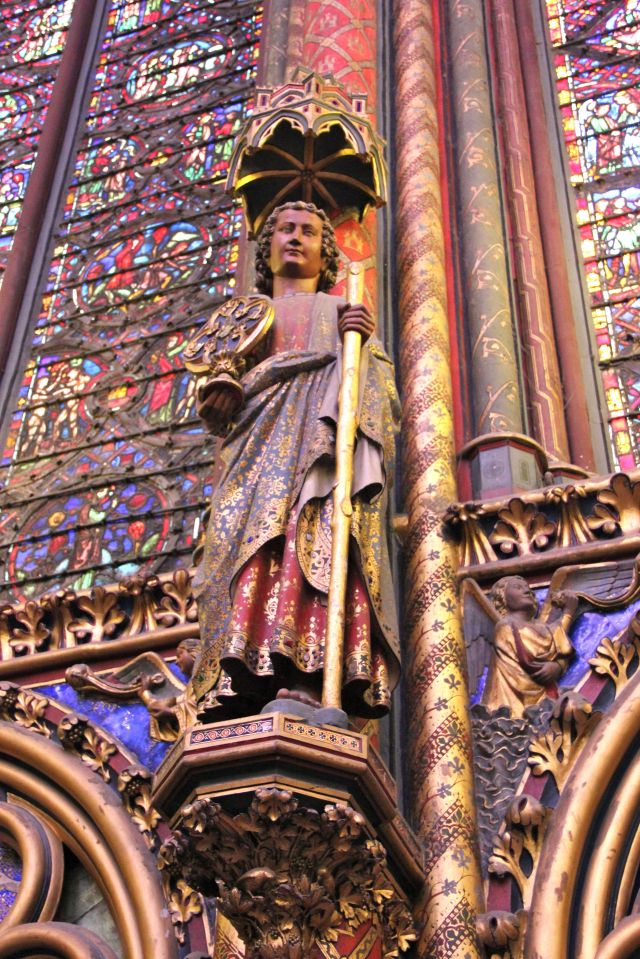 Statue on the wall

The picture was taken from below as the statue is about ten feet off the floor and must be six or seven feet tall.  The ceiling vault is very high – 139 ft by one web source so it’s nearly impossible to capture the grandeur of the place. Here is one last shot that tries to capture a floor to ceiling image.  Note that the left side is cutoff because that area was under renovation and all covered. 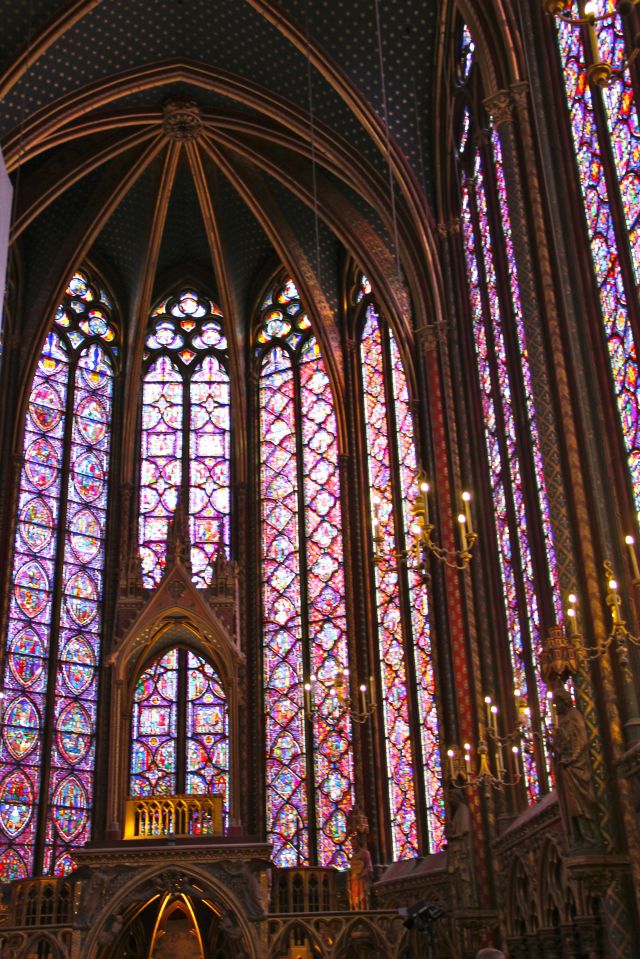 Well, it’s way past my bed time and gran is still trying to get the grandkids to sleep so I’ll stop with the pictures for tonight.

In other news, I decided that this is really going to be the year that I make Christmas presents for everyone in the family.  That means if I start now I am behind schedule.  One of the biggest problems for me is to figure out what to make so I decided to have the grandkids help. A few nights ago I pulled out a number of my scroll was magazines and explained my problem to the eight year old twins – their ten year old brother took an advisory role but mostly stuck to building a Lego creation.  It took them about 30 minutes of scrambling through the pictures to decide what grandpa was going to make for each person and they helped me make a careful list.  Yesterday I took two of them over to the lumber yard and they helped pick the wood for the first couple of projects.  In the afternoon they came out the workshop to “help” me.  I did get a start and entertained them for a couple of hours before they decided we’d “worked enough” for the day.  They also made a few “gifts” of their own but that is another post.

Born in California Did the school thing studying electronics, computers, release engineering and literary criticism. I worked in the high tech world doing software release engineering and am now retired. Then I got prostate cancer. Now I am a blogger and work in my wood shop doing scroll saw work and marquetry.
View all posts by Andrew Reynolds →
This entry was posted in Travel, woodworking and tagged musee de l armee, Paris, sainte chapelle, travel, trip to paris, vacation, woodworking. Bookmark the permalink.