The family legend in my family, as spread by my mother, was that grandfather could drive a three inch nail through two boards with three blows of the hammer – one to set, one to drive and one to set the head flush.  I never saw my grandfather do that but I do remember the one time he showed me how to hammer in a nail.  I was maybe seven and the lesson didn’t last long but I still hold my hammer the way he showed me.

I’ve never been able to drive a three inch nail with just three strikes – managed it in four once, but normally I take about six.

My mother’s side of the family were mostly craftsmen – grandfather ran a hardwood flooring company, an uncle a cabinet shop, and so on.  Guess I inherited the building gene and my love of wood from them.  I don’t have a great story of hanging around their shops.  Grandfather died when I was just nine and my uncle lived in another state.

But I did hear the family stories and early on found myself able to handle most tools.

The grandkids are still in town and they, like most kids, are interested in what the adults in their lives do.  I’ve tried to explain software engineering to them, but they don’t seem to grasp the finer points of software configure management, or my latest DevOps theories.

They are very interested in my workshop – or rather that messy disaster that passes for my shop.  They like to do woodworking.  I have thought that I should teach them some shop skills.  One day I did spend sometime looking up kids woodworking projects and wow there is some impressive stuff out there.

And most of it looks like an adult planned each step, guided each saw cut and held the hammer for each nail.  Frankly, that just looked boring.  Then I found this really cool project in a scroll saw magazine – a boomerang shooter.

There is no way a kid could build it but I figured if they just thought they helped it would be a cool experience for them.  One of the twins just loves being with me in the shop so I had him help me.  He did some of the simple cuts on the scroll saw (with me holding the wood) and I let him pull the handle down on the drill press a few times.

He did fail the sandpaper task – just couldn’t convince him that two passes wasn’t enough.

While the project was fun and all the kids are practicing shooting the little cardboard boomerang, grandpa did most of the work.

My theory of kids learning the fine art of woodworking is this:  Give them hammer, some nails, a box wood and let their imagination run.

I’ll give one lesson in hammering and then just sit in a corner and watch for safety violations and questions.  I have a bunch of other rules, but I find that in time they get the message.  There are lots of things I won’t let them do – drilling holes, cutting wood, throwing blocks of wood at their brothers… etc

I figure it’s important for them to figure out how to do with what they’ve got in front of them.  After awhile they do discover that holes need to be drilled, and wood needs cutting to size so they learn that they can ‘out source’ to grandpa – mark where you want the cut, or where you want the hole – and grandpa will use the power tools to do what they want.  It can be hard for me sometimes not to comment on what they are building – even if I know it’s not going to work out they way they want.

The best way to learn it to make mistakes.  My job is provide a safe place to explore and let their imagination run.  Here are some of the pieces they made yesterday:

Our grand daughter joined the fun yesterday and made this doll’s desk: 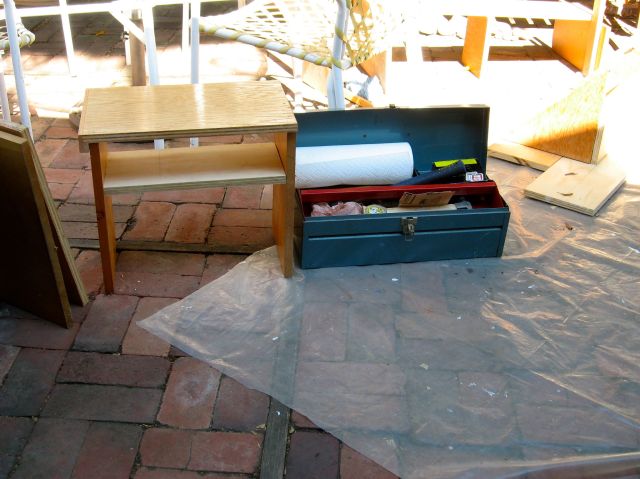 Here is a kid’s version of a catapult. It uses rubber bands and can shoot a plastic golf ball about two feet.  A few engineering changes are planned:

The exact function of this has still not been told to us, but it took two holes and a bunch of nails to put together:

This is still a work in progress.  We ran out of time and it’s waiting for grandpa to make a cut.

and while they were all working I put a few more boards down on my deck: 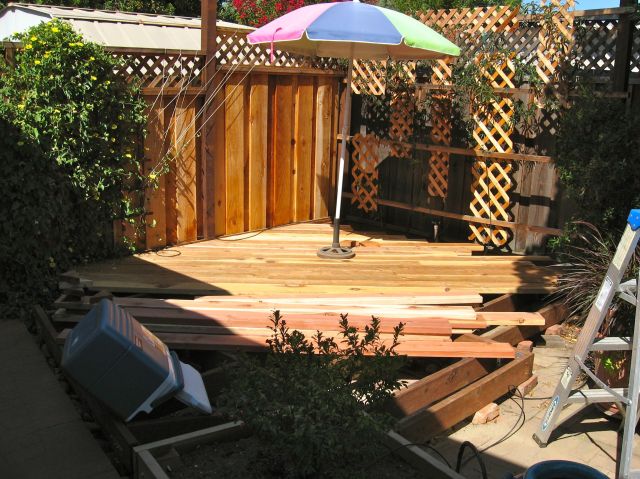 This weeks’ progress on the deck

They only have one more week with us so I don’t know if we’ll get another afternoon to make things, but they are hoping Gran will get some paints out so they can do some painting on their projects.

Born in California Did the school thing studying electronics, computers, release engineering and literary criticism. I worked in the high tech world doing software release engineering and am now retired. Then I got prostate cancer. Now I am a blogger and work in my wood shop doing scroll saw work and marquetry.
View all posts by Andrew Reynolds →
This entry was posted in woodworking and tagged grand kids, Kids projects, kids woodworking, woodworking. Bookmark the permalink.

2 Responses to Kids and Woodworking