This week I continue of our adventures in Arizona.  Last week I told you about our calling for a tow truck.

While I was on the phone with the insurance company arranging for the tow, Heather was on her phone looking for a repair shop in Gallup.  We’d already discovered the lack of facilities that deal with Hondas in that part of the world and wanted to make sure that wherever we got towed to could handle the repair.  It took her a couple of calls to find that the Goodyear Auto Service Center could do the repair.  The only question was parts and they promised to see if they could find one.

It was about 10:30 am when I finished with the insurance company.  They didn’t say when the tow truck would arrive, but they’d call when it was all set.  Didn’t take too long and the insurance called back saying the truck had been dispatched.

Checkout time for the room was 11:00 am and we dutifully loaded the car and went to the office.  The was a little restaurant next door and we went over for a cup of tea.  While we were waiting I called the tow company to confirm they were on their way and Heather called Goodyear to see if they’d found the part.  The truck was on the way and Goodyear had found the part locally so all seemed right with the world.

and then we waited.

I don’t recall exactly when the tow truck showed up, but I think it was around 12:30.  The driver was efficient and clearly knew his job.  I’ll call him Mr. M, as I didn’t ask his permission to write about him.  Here’s how they tow cars on the reservation: 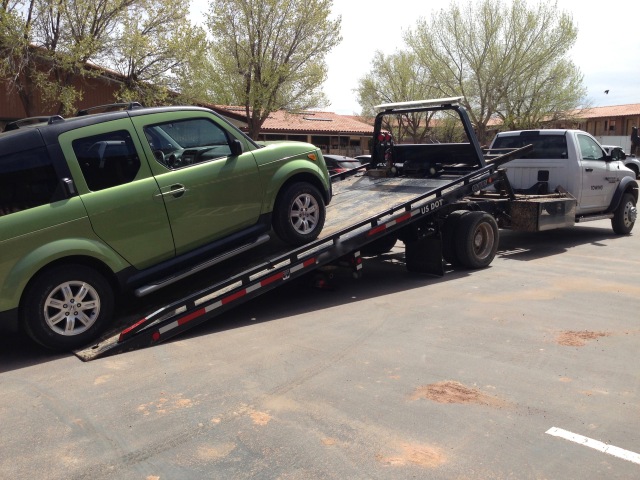 Yes, they use regular tow trucks.

We got into the cab and started the search for seat belts.  Mr. M rarely has passengers and had no idea where the belts were.  We finally found them and were soon on our 91 mile journey to Gallup.   Mr. M wasn’t chatty at first, but was friendly and answered our questions politely.  We found out that he’d been delayed because the insurance company messed up the paperwork the first time and had to resend it. Then I discovered he’d driven nearly 70 miles to pick us up.  He was going to spend a lot of time driving that Friday.  My calculations have him driving about 230 miles to take us 91 and get home.

As we traveled Heather started asking questions and we found out that Mr. M was Hopi and lived on the nearby reservation.  I am guessing he’s about my age as he told us about going to Indian School in Reno in the 70’s.  He got started telling us stories about school and getting summer jobs at the casinos in South Lake Tahoe.  We had a bit in common there as both we and Mr. M have family in Reno.

We asked him what he did in his free time and first thing he said was, “Oh, I go ear tagging on my mom’s place.”  Sounded a bit odd to me until I learned that his mother had cattle and he was going to go out and tag the calfs in the herd.  That then got him talking about how he needed to buy a new horse and the problems he was having with the guy he wanted to buy the horse from.  Turns out the guy selling the horse wasn’t exactly good about returning phone calls, but had the “ranch broke” horse that Mr. M wanted.

Mr. M also told us about his adventures helping his girlfriend remodel her home.  Mr. M complained about the crazy drivers on the road just after we witnessed a car use the shoulder to pass another car about what we guessed was about 70 miles per hour. There were stories odd people he’s had to tow.  There was the story of the English woman in a rental car that he drove all the way to Phoenix after she got stuck in the snow and kind of freaked out about the whole thing.

We asked about how people on the reservation got land to put their house on and we got a bit of the inside scoop on the tribal politics of land assignments.  He also offered the occasional complaint about the “younger generation.”  Mr. M was particularly concerned about how they weren’t doing real Pows anymore.  Mr. M didn’t like the notion of having a celebration from just 6:00 pm to 10:00 pm – after all Pows should go on all night.

Kids, no respect for tradition, right?

When pulled into the Goodyear the staff came out to meet us and had Mr. M off load our car right into the service bay.  Heather then told me that she’d enjoyed talking to Mr. M and said, “I got the native guided tour I wanted right here.” 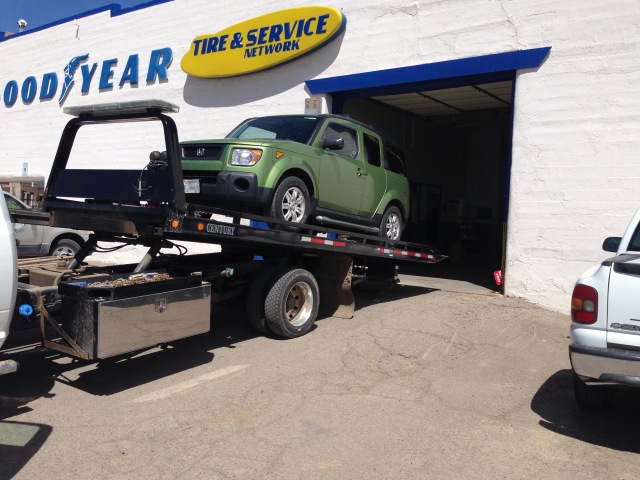 Wasted no time getting into a service bay.

The Goodyear folks were efficient and got to work right away as Heather and I wandered off to find some lunch, the ATM, and finally spent some time at the Gallup Coffee Company drinking tea and watching them roast coffee beans.  Honest, they roast their own beans on site in a gas roaster by the front window.

Over tea we looked at our options and decided that we were basically done and it was time to head home.  Checking google, we decided that we could make it home from Flagstaff, so it was back to the car and I-40.

We rolled into the motel in Flagstaff late and decided dinner would be the remnants of our ice chest.  We dined on cheese, crackers, salami, and cherry tomatoes.

In the morning, we stopped to fill the gas tank, set our course west on I-40, and headed out to find the setting sun.  It was in Kingman that I discovered the gas cap was missing.

But that’s a story for another day.

Born in California Did the school thing studying electronics, computers, release engineering and literary criticism. I worked in the high tech world doing software release engineering and am now retired. Then I got prostate cancer. Now I am a blogger and work in my wood shop doing scroll saw work and marquetry.
View all posts by Andrew Reynolds →
This entry was posted in Travel and tagged Arizona Travel, travel. Bookmark the permalink.

22 Responses to The Hopi Tow Truck Driver and Tour Guide