Two weeks ago I published a post called 2017 where I outlined some of the things I am going to do this year.  Yesterday I did item 7 – attended a protest march.

Yup, I joined Heather and members of her art class at the San Jose Women’s March.  Well, they and 25,000 of our friends (give or take a few thousand).  Early in the week I heard estimates of 7,000 signing up to attend and I’ll admit I was a touch afraid that I’d be the only man there.  By Friday, I’d heard of a few guys I knew who were planning to attend and the sign ups for marchers had grown to 15,000.  During the march one police officer told us that she thought there was 40,000 there, but the official police estimate came in at 25,000.

Getting there was a big adventure of it’s own.  There is a light-rail line near our house that goes right downtown to the start of march.  No brainer right?  Yeah, also no room on the train.  The transit people had been told of the march and put extra trains out, but the first one that came by was too full for either of us to get on.  Another train came about 15 minutes later that there was only room for Heather to get on.

So, being a noble soul and not thinking clearly, I told her to stay on and I’d get the next train and would catch up with her.  The next train was so full that it didn’t even open its doors.  Having to wait got my brain working I realized that line we’re on is a spur that dead-ends three stations to the south where the train reverses directions and goes back north into downtown.  There were several other people with me on the platform and when I walked to the south bound side, one said, “You’re getting the south train, right?”

“Yes,” I said and most of the people on the platform crossed over and we got on a nearly empty south bound train, which in due course became a north bound train and delivered us to the march.  Some marchers called for Uber and the transit company sent out busses to get people downtown.

When I got off the train Heather and I texted madly to find out where each other was.  It took me almost ten minutes to fight my way through the crowd to where she was.

Once united, the march started, or rather the long slow shuffle started (warning there maybe another post and/or poem with that title in the future).  The route was planned to be seven tenths of a mile – a distance that Heather and I could normally do in 12 minutes.  The crowd was so large that it took almost and hour and a half to make the distance, but we stayed the course and finally made it to the end.

Along the way we saw a lot of great signs, heard some great chants and often took up a cheer from the front of the line.  Most of the time we had no idea what they were cheering about, but that really didn’t matter and we just cheered along.  The real point was a community gathering in common purpose.

As you can imagine most of the chants were standard protest stuff (come on, we’re Californians, protesting is one of our specialties).  I have to say my favorite of the day was, “This is what democracy looks like!”  Really great when you can get a couple of thousand screaming that as one voice.

Heather made a great sign for the day.  Here she is at the start of the march with it.

Heather geared up and ready to march.

I would hold the sign from time to time and here’s a picture of me with it:

I am smiling. That is my happy face.

Here is just a picture of the crowd and one of the funnier signs: 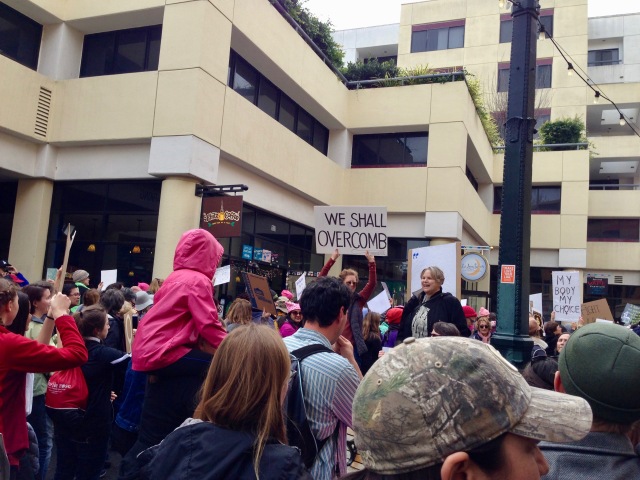 And finally here is the back of Heather’s sign with her reasons why she’s marching.  All of which I agreed with. 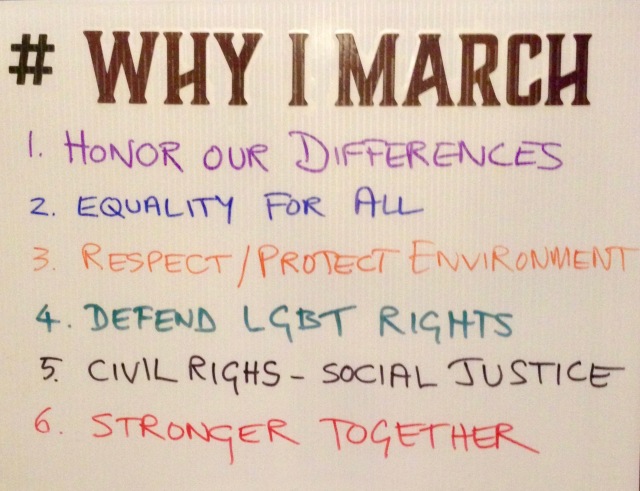 In case you can’t see the picture on your device here are the reasons:

Well, I hadn’t intended to write much tonight as I am a bit tired, so the review of the play we saw after the march, my preaching at church this morning, and the long-winded version of why I marched will have to wait till at least after pizza.

Born in California Did the school thing studying electronics, computers, release engineering and literary criticism. I worked in the high tech world doing software release engineering and am now retired. Then I got prostate cancer. Now I am a blogger and work in my wood shop doing scroll saw work and marquetry.
View all posts by Andrew Reynolds →
This entry was posted in General and tagged protest march, San Jose Women's March 2017. Bookmark the permalink.