We’ve been very busy week, but we did make it out for weekly outing.  This week we went to the Rancho San Rafael Regional Park and took a walk around the Wilbur D. May Arboretum.  Here are some pictures:

One of the many bridges.

Arboretums have lots of trees. 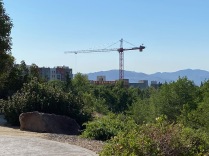 Not sure what kind of tree this is, but you could see it from many places along the paths.

All this needs is a brass band and lemonade to make the scene complete. 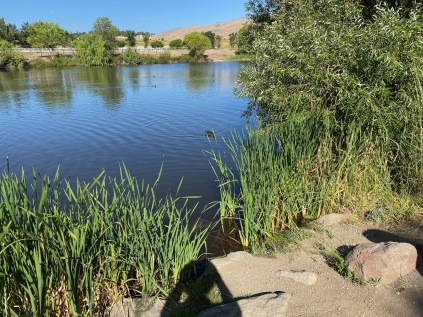 A closeup of Herman’s pond. My shadow decided to do a little photo bombing.

A duck. I don’t think this was Herman. 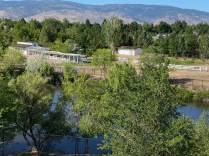 Herman’s pond is down there.

Looking from the Irwin Overlook into Rancho San Rafael Regional Park. Hard to see in the picture, but there is a dog park out there.

It was a great morning out and we stopped at a great coffee shop for some fancy coffee and a sinful desert but I failed to get any pictures of that.  Yes, I just ate it too fast.

Hopefully I get back into a regular posting routine soon as we finish working through all the details of moving.

Born in California Did the school thing studying electronics, computers, release engineering and literary criticism. I worked in the high tech world doing software release engineering and am now retired. Then I got prostate cancer. Now I am a blogger and work in my wood shop doing scroll saw work and marquetry.
View all posts by Andrew Reynolds →
This entry was posted in Hiking and tagged Day Trip, hike, May Arboretum. Bookmark the permalink.