We did it.  Finally did it. They arrived Wednesday – two shiny new iPhone 5s.

I’ve resisted for years but finally the decision was made to drag ourselves into the 21st century world of communications.

There are a number of reasons why I’ve been resistant to getting smart phones.  Here are some of the more important ones:

I rarely use one.  Really, I call Heather maybe once a week to tell her I’ll be late getting home.  Each of my two brothers calls once a week.  A high-tech recruiter calls about once a week for a chance for me to hang up on them.  So that’s about five calls a week.  During a busy week I might get six calls, if a friend calls – seven if my doctor’s office calls.
I’ve got a big 27 inch iMac computer to read emails on.  Why would I want to read them on that tiny little smart phone screen?
I am afraid that a new phone will become obsolete five minutes after I buy it.
Have you seen the price?  OMG!!! Not just the price of buying but the monthly fees.
The world just needs to disconnect more, slow down and consider the beauty of the natural world all around them.  I am trying to lead by example.
I have a cellphone.  It works.  It’s worked for 11 years and until it stops working I see no reason to get a new one.

Franky, I’ve just not seen the utility in having one, but then I am a bit of a Luddite and tend to object to most new technologies just because they are new.  Yes, not rational.  I am one of those guys that just falls into habits and tends not to veer from my routine.  If I was left undisturbed, I’d likely wake up, shower, go to work, come home, have spaghetti for dinner and watch Red Green, Adam-12 and Emergency! every night before going to bed.

Well, I have discovered that Netflix has all the Adam-12 and Emergency! Shows and Red Green has posted all his shows on Youtube – all of which I can now watch on my fancy new big screen TV.  So, I guess not all new technology needs to be beaten with clubs.

Here we are at that part of the post where I must revile the truth:

Why I bought iPhones

I am thanking Heather for being on the beach with the grandkids with her old cellphone in her pocket and in a fit of playfulness ran into the surf with the kids.  Yup, cellphone turned on and straight into the salt water of the Gulf of Mexico.

She discovered this back in the hotel room a couple of hours later (no wonder she didn’t get my call).  The phone was dead, DOA.  I made a half-hearted attempt to revive it.  Dried it off, plugged the charger and the poor little thing just vibrated and flashed it’s little screen.  Obviously it was suffering so I removed its battery – humanly euthanizing the poor little creature.  I hate to see things suffer.

“What do we do?” Asked Heather.

“We buy iPhones and blame you,”  I immediately replied.

Visions of playing Freecell and getting driving directions on an expensive iPhone started to fill my head so I don’t really recall the conversation after that but generally recall Heather agreeing to buying the new phones.  Still not clear if she is going to take the blame, but I figure she can send me Text message to let me know for sure.

Still, even with all the general agreement and Heather wanting a phone, it was last Monday before I called and ordered them.  I tried ordering them on-line but failed – too many buttons and Verizon site was being weird.  I tried to chat with a rep, but got a polite message that one would be available in the morning.  Instead, I just called the 800 number and did what successful men through the ages have done – I played dumb.

“Could you send me two new iPhones?  I have a credit card.  My wife said she wants a white one.  Do you have a book on how to send them text message things you can send along with it?” I asked of the overly friend operator.

As she brought up my account, I sensed a change in her attitude as she became more and more helpful.  Guess they work on commission and she realized she had a sucker on the line with a high credit limit.

I am not sure I like being called ‘honey’ by someone taking my credit card number.

The phones arrived on Wednesday and per the instructions I called the 800 number to activate the phones.  I failed.  Ended up having to call back twice and even the tech support people where having trouble.  Something to do with upgrading from an 11 year-old analog phone was causing troubles.  I’ll have to say nice things about Verizon’s support (even though in a blog, I am supposed to complain bitterly). They stayed on the line and kept escalating the call until they found someone who could get it working.  Then the lady stayed on the phone for another 25 minutes to walk me through setting up everything on the phone – email, voice mail, wifi, that texting thing but I drew the line at trying to figure out Siri (whoever/whatever that is).

And I handed Heather her iPhone and we started to play with them.

We entered a realm of bliss and excitement we’ve not know since… sorry about to cross into ‘too much information.’

These new phones are the coolest toys we’ve ever received.  Is there anything these phones won’t do?  I am sure there is app to cook breakfast but I haven’t had time to look for it.  So far I’ve loaded my music, played with the GPS driving directions, sent Heather a text message or 12, got a voice mail, played freecell while watching Adam-12, set up my email, connected to three different wifi hotspots, created a calendar, added a contact and blocked a recruiters phone number.

So far I think I’ve spent more time on my iPhone than my iMac this week.  The only reason I am on the iMac right now is that I can’t type this much on the tiny iPhone screen.

A couple of other things happened this week.  Heres a picture of the one other thing I did this week (taken with my iPhone naturally). 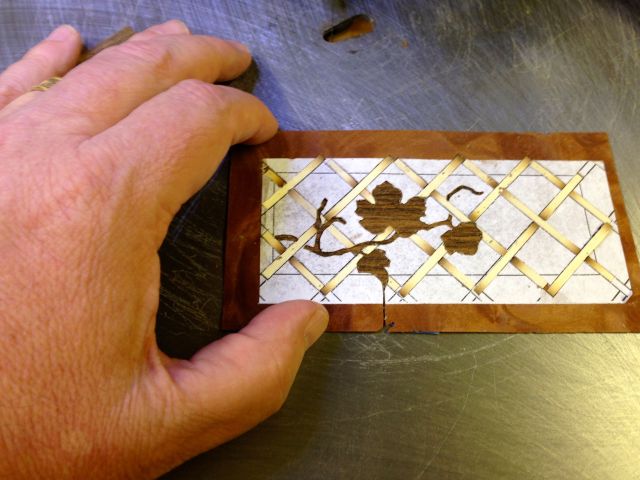 Born in California Did the school thing studying electronics, computers, release engineering and literary criticism. I worked in the high tech world doing software release engineering. Then I got prostate cancer. Now I am a blogger and work in my wood shop doing scroll saw work and marquetry.
View all posts by Andrew Reynolds →
This entry was posted in Marquetry, woodworking, Writing and tagged apple, basket weave marquetry, gadgets, iPhone, iPhone 5, iPhone 5 experince, Marquetry, technology, writing. Bookmark the permalink.